I read an article in the Canberra Times about using apps and GPS devices to "dodge" the law. Apps like Wikango. That particular article doesn't seem to be online. But here is a similar story

The police response:
An official statement says the Queensland Police Service ``does not support the use of any particular instrument, device or system that might assist motorists to avoid detection while committing traffic offences''.


I am astonished at the attitude of the writer and of Australian Police. It's like these things are helping people evade the law. How about: it's helping them abide by the law. Road law has become so complex that it's difficult often for locals and nearly impossible for non-locals to even know what the speed limit is any particular place. The speed limit on a road can change 4 or five times in the course of a couple of kilometres and often only one sign on the side of the road for each change. A sign that may be obscured by a parked truck, a moving truck, a bus. Speed limits can change depending on time of day or day of the week or school term. Anything that helps drivers know what the speed on a road is should be encouraged. I don't understand the Australian police attitude to radar detectors either. They should be encouraging them and putting out lots of radar to set them off. Similarly GPS devices with speed limit warnings.

Is their attitude that drivers should be doing all this other stuff and driving safely as well? Why not encourage anything that would help. Why not make or encourage GPS devices that would warn drivers when reaching or going over the speed limit? Even devices that could limit the cars speed? Is revenue raising more important than safety?

The article says: that to use the apps on a phone drivers will have to touch the phone while driving, which is illegal. You have to be joking? What about touching things on your car dashboard and instrument stalks? Is that illegal too? Is it illegal to touch a device on your dashboard that switches on your turn indicator while making a turn? Is it illegal to turn on your headlights by touching something on your car dashboard (possibly right near a bracket for a phone)?

I should add here some gripes about Canberra road speed rulage and signage.
1) My daughter used to go to a childcare centre in Canberra where every morning and afternoon toddlers were moving around outside the building on a 60km road. The ACT government would not make it a 40k zone. Most of the colleges in the ACT (senior high schools) with teenagers 16-18 years old have huge 40km zones despite the fact that the students are well old enough that they should be completely safe on roads, unlike toddlers.

2) I have noticed a number of places in the ACT where a local 50km road enters straight onto an 80km road with no 80km signs near the intersection. There are few speed signs on the 80km road so a non-local may not understand that cars on that 80km road may be travelling much faster than 50km. If you are going to have slow local roads connecting onto fast 80km roads you need to have a lot more signs. There seem to be a lot of memorials on these intersections so I assume people are dying there.

3)I have noticed in ACT and in other places like Adelaide there are roads that change from 60km to 50km with only one sign and little change in the look of the road. I notice that police often hang around the start of the 50km section to book people travelling too fast on the 50km road. This sort of thing is an almost guaranteed trap for non-locals. I think if this is not to be thought a revenue raising trap and the local councils are serious about people slowing down they need to either make the whole road 60km or 50km or sign such changes much more seriously.

I hear that people are talking about cutting the speed limit in suburbs in ACT to 40km on the general principle that speed kills. It is the case that in road accidents that speed kills. But it is not the case that going over the speed limit in particular kills. In fact most of the fatal accidents happen in the country, not in city suburbs and at much greater speeds than the speed limit and not 5km or 10km over the speed limit. What about the other options: traffic calming devices, shared road areas, pedestrian right of way areas. Why not create pedestrian right of way areas with special coloured roads or signs painted on the roads.

If schools are so precious why not put changeable speed bumps or movable traffic calming devices outside schools to use the laws of physics to enforce/encourage people to slow down and coloured roads outside schools rather than just setting speed limits and using punishment. In other words help drivers. And what about day care centres and other areas with lots of toddlers going in and out?

Edited: I was thinking about the physics of this and realised that:
Speed doesn't kill, acceleration kills.
Posted by Kim at 21:54 No comments:

Why do we have all these different power plugs around the world. It's a nightmare and such a hassle for travellers, importers, exporters and manufacturers.

Most plugs are reversible, you can turn the plug around and reverse active and neutral. One thing that the Australian/Chinese and the British plugs do is that they are not reversible. You can't turn the plug around and change active and neutral. In the US this doesn't matter as they have balanced 55 volts per wire I think but for all the other countries which have 220/240 volt systems with active and neutral, it should matter.
The Australian/Chinese plugs, even the two pin non-earthed ones can't be reversed. The British plugs always have earth but are big enough to fit a computer inside. Reversible plugs wouldn't pass safety standards in Australia.

There is a simple solution to the whole mess and it is already universal: C13 and C14 connectors

The advantages of these is that they are non-reversible, small, the male has a shroud that prevents wires getting behind it. Did I mention that they are small? 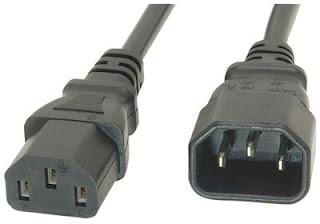 It really wouldn't be hard to make power outlets, and power boards with these.
Posted by Kim at 13:08 No comments: