Anyway, I keep reading blog postings with people dissing bluetooth headsets. I like bluetooth headsets. Yeah, they're fiddly to set up and turn on etc, but I think they're cool. I especially like The one John Barrowman (Jack Harkness) wears in Torchwood. Way cool. Is it real? 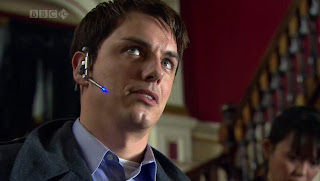 So what is it about the criticism that you look crazy when you use a bluetooth headset? When I was growing up people who talked out loud while walking along the street were considered pretty crazy. Nowadays everyone does it, eh? A while ago in Sydney I saw an old man who looked like he had been sleeping rough for a while walking down the road holding something up to his ear, like anyone would a cellphone, and talking loudly. As he got closer I realised what he was holding up and apparently talking to, was a mossy old house-brick. I guess crazy people have ways of getting by too.
Posted by Kim at 23:06 5 comments: